Clive Barker’s HELLRAISER is one of the seminal films of the 1980s horror boom. Smart, sophisticated and visceral, Barker’s directorial debut became a cottage industry of its own, with multiple sequels (and the merchandise to go with them) , as well as two comics series (Marvel’s Epic Comics, 1989 – 1994 and Boom! Comics, 2011 – 2015). They say the third time’s the charm, as Barker reopens the doorway to the “the further regions of experience” next month in a new and ambitious outing that should leave the Cenobites’ acolytes very pleased indeed.

Hellraiser: Anthology, the inaugural project for Barker’s new graphic novel imprint, Seraphim Comics, is a 90-page hardcover collection featuring 11 original tales set in the universe first introduced with his novella, THE HELLBOUND HEART.  The hardcover collection is priced at $35, while a limited edition (signed by Barker) will be going for $65. The digital edition ($15) is also available for those who like their comics on the portable side 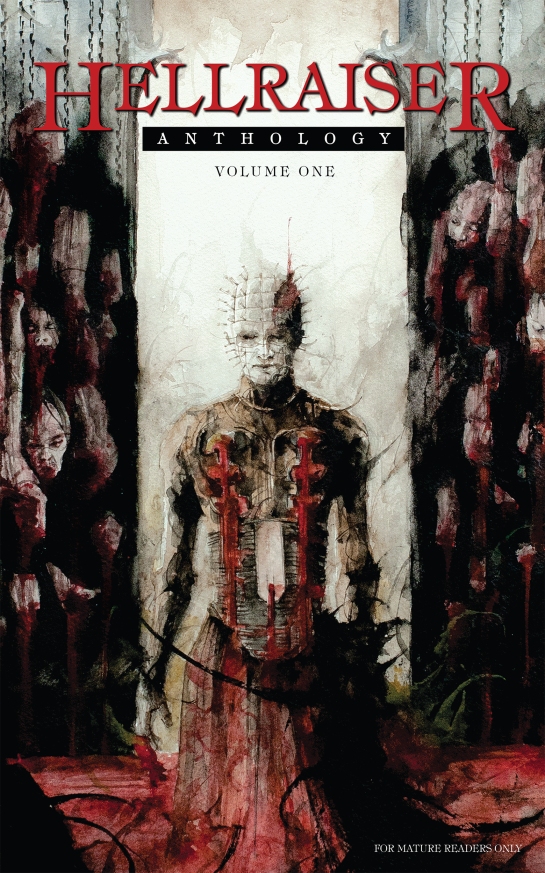 As for who’s behind the wheel, Seraphim has lined up a solid list of contributors to play in Barker’s infernal playground. As well as tales from Barker himself (both writing and illustrating)and both Seraphim’s VP, Mark Alan Miller ( who just so happens to be interviewed right here) and Editor -In-Chief Ben Meares,  there are also contributions from Blumhouse.com’s Editor-In-Chief, Rebekah McKendry and contributing writer, David McKendry, POW Entertainment’s Matt Murray. Art duties have been filled by Daniele Serra (responsible for the cover art shown above), Riley Schmitz, Sam Shearon, Nick Percival, Jim Terry and Jimm O’Dell.

While there have been previous four-colour forays into Hell’s Labyrinth, this one feels very different and exciting – not only because of Barker’s involvement in the process but this time out, as the original tagline for HELLRAISER reads …there are no limits.
“We had a very simple mission statement at the beginning of our journey with this comic” states Meares in discussing the project. “We set out to create something with no limits and no censorship that everyone involved, as both creatives and fans of the Hellraiser mythos, would be proud of.” And if the previews provided by Seraphim are any indication, it looks to do the sadistic and sensual series proper justice, with visions (and characters)  both new and exciting and -as seen below – very familiar.

Miller seconds the notion.  “We chose to publish this anthology in-house for one main reason…It frees us to tell stories that are entirely uncensored. Hellraiser, as a film and comic book franchise, has always needed to be censored to one degree or another. By producing this comic in-house, and distributing it straight to Hellraiser fans via our web store, the wide array of talented people on the book are free to tell the stories they want to tell, and dig as deep into their twisted imaginations as they please. And, let me tell you, the experience has been utterly freeing for all involved, and that creative freedom bleeds through the pages of this anthology.”

“I’ve been a part of a number of Hellraiser projects throughout my years with Clive… and this is easily the most personal project I’ve seen pass through these walls. It’s as lovingly curated as it is delightfully grotesque. I’m proud to have my name in its pages.”

HELLRAISER: ANTHOLOGY makes its grand debut on at this year’s Monsterpalooza convention in Pasadena, CA.  Following its arrival at the weekend-long convention (April 7th to 9th 2017), it will go on sale on April 14th through, www.realclivebarker.com, in both hardcover and digital formats.

And, in a move that will shock absolutely no one who knows me, I will have a review in the coming weeks. So keep your eyes (and flesh) peeled..