Mark Alan Miller is a busy guy. On top of his “day job” as Vice-President of Clive Barker’s Seraphim Inc., Miller was the driving force behind the long-awaited “director’s cut” restoration of Barker’s 1990 cult classic, NIGHTBREED. But aside from overseeing the day-to-day operations of The House That Barker Built, Miller’s been flexing his own creative muscles.

And it’s a lot of flexing, too.

Starting off in somewhat familiar territory with BOOM! Studios HELLRAISER comics, Miller went on to collaborate with Barker on NEXT TESTAMENT, a twelve-issue series that introduces Mr. Wick, the true Old Testament God who’s not pleased with what he sees on his return… and sets about destroying it all.

Following that, Miller teamed up with Dark Horse and Joe R. Lansdale for THE STEAM MAN, a deliriously inventive and brutal mash-up of Steampunk & vintage pulp sci-fi/horror set in the Wild West based on Lansdale’s short story,“The Steam Man of the Prairie and the Dark Rider Get Down: A Dime Novel.”.

Having now staked his claim in comics, Miller has moved into full-length prose with the upcoming release of the novelization of NEXT TESTAMENT (courtesy of Earthling Publications) and while it may seem odd to adapt a comic into novel form, it’s all part of the plan. But I’ll let Miller himself explain that, as well as what’s coming around the bend.

What were the first seedlings of the story for NEXT TESTAMENT?
It was all the stuff that Clive and I initially bonded over when we first started getting to know each other. We are both incredibly inspired by the Bible, and what people do in its name. We’re also drawn to metaphors, and telling stories that exercise certain portions of our psyches. This was very much an exorcism.
The story first appeared as a mini-series for Boom! Studios. What prompted the upgrade to prose-based novelization, or was that always the endgame in the back of your mind?
Funny enough, the original idea was to do it as a novel. Clive and I had created Wick, and devised this story that really did it for both of us, and I was going to write it all out, and Clive was going to illustrate it. Then we had a conversation with Boom! after the success of the Hellraiser comic, and they were looking for something new. We immediately though of Next Testament, because it began with the visuals, so it just made sense. To their eternal credit, Boom! loved it, and just let us get to work. It was easily one of the greatest professional experiences of my career.
Tell us a bit about Barker’s involvement and inspiration in this project.
When we initially came up with the story together, Clive was doing an experiment with paints. He’d already painted about 3,000 canvases, all standing close to 4 feet tall (and who hasn’t really?) so he wanted to try something new, and he began turning the human form into a canvas, letting the paintbrush lead him. I volunteered to be one of the experiments. Who wouldn’t want to be an original Clive Barker monster?! So, hell yeah, I jumped at the chance. And when Clive was done, we both stepped back, and looked at what had emerged, and it was Wick, in the flesh. This guy standing in the mirror looked wicked, and mischievous, and his colors felt like they had their roots in something ancient that tapped into life itself. The story we came up with on the spot was essentially the skeleton of Next Testament. This new creature was God, he’d been dormant for a long time, and he woke up and saw the world, he wasn’t happy.
Has there been any consideration in adapting the work to film or television? And which would be your preferred choice?
Oh absolutely. There’s lots of talk about it. Personally, I’d love to see it as an animated series. I think you can get away with a lot more in that format. That being said, I won’t close the door to any incarnation this story wants to be. I’ve lived with it for a long time. It feels very personal. So I’ll be with it wherever it wants to go.

As Vice-President of Seraphim, much of your time is overseeing the Barker empire. How do you juggle the day-to-day of running a multimedia undertaking like that with personal creative goals? Is there an overlap between the two?
That is correct. I’m on the front lines, fighting the Barker war every day. The day to day is certainly a challenge, but it’s one that I wake up excited to take on every day. The library is so vast, and  has been spread throughout the world, and throughout the decades. There’s always a line in the sand to follow, and always someone fascinating to talk about this very dark, very beautiful world. My title is Vice President of the company, but I identify as a writer and a producer – as a creative. So I’d definitely say there’s overlap. I love creating worlds with Clive. And I also love protecting his worlds, and exposing them to new audiences and in new ways. Sometimes I get to do both at the same time, and a guy can’t ask for a much greater gift than that.
On top of TESTAMENT, you also collaborated with Joe R. Lansdale on Dark Horse’s THE STEAM MAN. What was it like working with the prolific author? 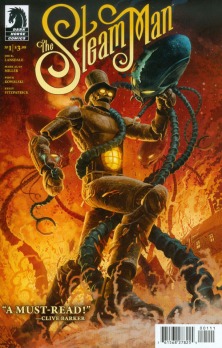 It was another dream come true! Joe is part of my holy trinity of great authors. It’s Clive, Joe, and James Ellroy. Of course there are countless other authors I love and admire and even idolize, but more than anyone else,  those three guys have blown the doors off my brain. Working with Joe was great, because I got to stretch different muscles when writing with his voice in mind. And it was a fun place to visit!
We’re talking about doing a few other things. In fact, I adapted a short story of his called The Dump for the anthology books that American Gothic Press did in honor of Forest Ackerman’s 100th birthday. It’s called Tales from the Ackermansion and my story follows John Carpenter’s. So…again…not a bad gig.
Now that TESTAMENT is on its way, what’s next – for you and for Seraphim?

Oh lots. Always lots. The conversations we’re having are on another level. With any luck, there will be some incredible Barker television coming your way in the coming months. We’re also diving deeper into self-publishing. We’ve got The Thief Of Always anniversary edition that Christian Francis and Vicky Barker produced together which will be sold exclusively on our web store. I’ve held it in my hand. It’s amazing. And you can also keep your eyes peeled for a new Hellraiser anthology comic, also for sale through our web store – www.realclivebarker.com. It’s a love letter to EC comics and the old Epic Hellraiser comics as well. It’s a no holds barred anthology where bad things happen…and sometimes they even happen to good people. If all goes according to plan, it should get under your skin quite nicely and stay there.

NEXT TESTAMENT is slated for publication later this year by Earthling Publications.
The HELLRAISER anthology is also scheduled for release this spring through Seraphim Ink and will be available exclusively at The Official Clive Barker Store.

2 thoughts on “NEXT TESTAMENT: The Gospel, According To Mark Alan Miller”