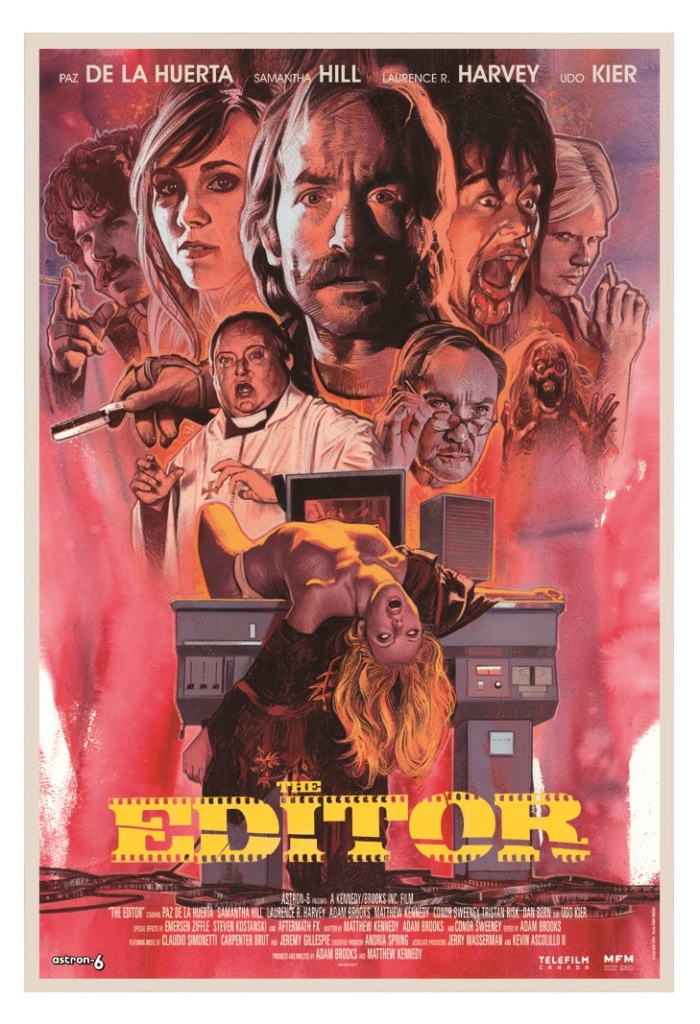 Satire, despite what some may think, ain’t easy. It takes more than a nod and a wink to the target-at-hand and broad juvenile humour to make a good parody (Scary Movie. I rest my case). It’s the best ones that understand and appreciate the source material, balancing the jabs with genuine love.

Case in point: THE EDITOR, Astron-6‘s third feature film outing and a masterclass in parody-done-right. Having tackled Troma-style exploitation sleaze (FATHER’S DAY) and Full Moon-esque lo-fi sci-fi (MANBORG), the Canadian collective have turned their attention to the Giallo, that uniquely Italian cocktail that encompasses murder mysteries, thrillers and supernatural horror.

Rey Ciso (Adam Brooks) is an editor, once the best in the world. Laid low by a crippling splicing accident, Ciso now spends his time working on exploitation quickies, an object of derision and scorn among his peers and his washed-up actress wife ( an appropriately campy Paz De La Huerta). And then the killings start, cast and crew being dispatched by a black-gloved killer in a variety of gory and inventive ways. Investigating the case is Inspector Porfiry ( Matthew Kennedy ), an ambitious detective whose dead-set on pinning the crimes on Ciso. Is the beleagured Ciso the killer, or is there something more sinister behind these crimes? From this point on, things slide sideways from a police procedural parody into the dream-like lunacy of Lucio Fulci’s filmography. And this is where THE EDITOR is leaps and bounds above other horror/thriller satires.

On the surface, it nails the period “kitsch” of the giallo’s heyday: the horrible fashion sense, the super-synthy disco soundtrack and more gratuitous nudity than common sense. What separates it, though, from other piss-takes on genre cinema is that it captures the tone of Giallo cinema with pitch-perfect precision. Nonsensical plot twists that defy narrative logic, awkward “lost in translation” dialogue, rampant misogyny, histrionics at inappropriate moments and the eventual transition into nightmare logic over rationality. All trademarks of the sub-genre’s pioneers like Fulci, Dario Argento and (to a lesser extent) Luigi Cozzi. There’s a genuine love and appreciation for the films they’re poking fun at. It never feels like they’re “above” or “better than” the material. And they’re funny. Ridiculously so.

With able support from recognizable horror troopers Udo Kier and Laurence Harvey, the Astron-6 crew also does double duty in front of the camera again and are all in top form here. Brooks’ world-weary Ciso is the straight man here, channeling the essence of Franco Nero. Connor Sweeney‘s blonde and clueless Cal is a gender-reversed prima donna and hits all the right comedic notes as the fame-starved “himbo”. But if one had to choose an MVP, it would be Kennedy’s Porfiry. Arrogant, cock-sure and just this side of inept, Kennedy gets some of the best moments in the film ( his “interruption” of the Cisos’ night out is priceless, and had the audience clapping and laughing out loud). For lack of a better comparison, there’s a hint of Will Farrell in his performance: the boastful buffoon with a complete lack of self-awareness. Take that as you will – personal tolerance for Farrell may vary -but it’s a brilliant performance, played straight and funny as hell.

THE EDITOR is the perfect satire, one that sends up and lauds the Giallo subgenre in equal measure. Without sounding too much like hyperbole, it also might just be the best thing that Astron-6 has done yet. Catch it in limited release (while you can) or pick it up on DVD/Blu-Ray from Scream Factory.

Because there’s always room for Giallo…

…that’s okay, I know where the door is.

NOTE: At Wednesday’s Rue Morgue Cinemacabre screening at The Royal, the audience was treated to a sneak preview of Astron-6’s latest project, the episodic web series DIVORCED DAD. Without going into too much details, it’s absurd, hilarious and buggy-as-f*ck. And the crowd loved it. While plans for web-wide release are still to be announced, Astron-6 will be taking it on the festival circuit, starting with a screening of episodes at Austin’s Fantastic Fest starting September 24th and running till October 1st .

Keep your eyes on Astron-6’s Facebook, Twitter and the official website to see if DIVORCED DAD is going to be in your neck of the woods. You will NOT be disappointed.