Jeff Lemire is one of comics’ most prolific and versatile creators. From the post-apocalyptic SWEET TOOTH to the superhero/horror cross pollination of ANIMAL MAN to the haunting and poetic THE UNDERWATER WELDER, Lemire’s bibliography defies cut-and-dried classification. Which brings us to his latest from Image Comics, DESCENDER, an expansive galaxy-spanning epic that fuses “hard” science fiction with grand space opera, with more than a dash of classic fairy tale.

The universe is piecing itself together, ten years after the arrival of The Harvesters, planet-dwarfing mechanical beings which laid waste to much of the civilized worlds upon their arrival. After the attacks, robots are deemed illegal, enemies of the greater good and hunted down with extreme cruelty.

Enter TIM-21, a young “boy” robot who emerges from a decades-long slumber. Waking to find the inhabitants of his colony all long-since dead or evacuated, TIM wants only one thing: to be reunited with his owners – his “family”. Unknown to him, his reactivation gains him the attention of others, including the universe’s ruling government and his inventor. Seems TIM’s programming has shared qualities with The Harvesters, qualities that could help avert disaster if they return. There are others after him, as well, but their interests in the boy robot are from benevolent. And thus, the chase is on.

Imagine PINOCCHIO in the world of MASS EFFECT, and you have the crib-notes summary of DESCENDER. And that is meant as a high compliment. It would be easy to lose any sense of character development in a world as densely-structured as this, but Lemire’s gift is in creating believable, relatable characters with well-developed relationship dynamics and that’s what gives DESCENDER its heart. This is a broken universe, filled with hard and jaded characters, but it never allows itself to fall into the easy trap of “grimdark”, edgy-for-the-sake-of edgy storytelling. There’s real heart here, with the optimistic TIM-21 as its fulcrum.

It also doesn’t hurt that it’s all so beautifully rendered. Lemire foregoes art duties this time out, with Dustin Nguyen manning the artist’s chair this time out. And it’s, simply put, gorgeous to behold. With fluid pencil work accentuated by watercolour, the hard and polished sci-fi edge usually associated with this kind of a story is given a lyrical and poetic look. It lends itself to a fairy-tale aesthetic, as mentioned above, but never loses intensity in the story’s more intense or violent moments.

DESCENDER has become one of the “buzz” titles since its debut, and with good reason. It’s intelligent, funny, heartbreaking and beautifully rendered epic storytelling with its eye on the smaller picture. It’s also further proof that Lemire is one of the best storytellers working in the business, comics or otherwise.  If you’re not onboard yet, this collected first volume is an easy recommendation for a “blind buy”.

SECRET WARS JOURNALS, the anthology series tied into Marvel’s universe-shattering SECRET WARS crossover, is one of the more experimental titles in this already gonzo-crossover event with C-Listers like Paladin, Misty Knight and even Millie the Model getting their moment in the sun.

This week’s issue features the aforementioned Millie story, as well as RISK OF INFECTION, a new take on the once-obscure Night Nurse. While Night Nurse may not be a “draw” on her own (even with her newfound prominence in the public eye thanks to Netflix’s DAREDEVIL), it’s this story that marks the four-colour debut of Vancouver’s Twisted Twins, Jen and Sylvia Soska.

Since the release of their grindhouse homage, DEAD HOOKER IN A TRUNK, and the subsequent whirlwind success of its follow-up, AMERICAN MARY, The Soskas have cemented their place in pop culture with intelligent and visceral storytelling and a fervently-devoted fan base. So it’s a no-brainer that their hardcore fans will be picking this title up, sight unseen. But what about everyone else? Is there enough here worth picking up for a non-card carrying member of The Twisted Twins Army?

The answer is yes. Without a doubt.

It takes a certain kind of skill to pull off a satisfying narrative within the confines of ten pages. Even more so when reinventing a pre-existing character for the sake of a one-and-done self-contained tale. But The Soskas pull it off. Taking the “Linda Carter” iteration of the character as their foundation, this Night Nurse is a gun-toting, battle-scarred, occult combat medic who travels between the planes of Battleworld, “examining the medical holocaust caused by all these varied ecologies butting up against each other.” One such holocaust: a rampant demonic techno-virus that’s part infection, part possession and all ugly.  The story is quick and dirty and wastes no time to getting Carter into the thick of things to cure the illness. We get just enough of her backstory, before everything goes to literal Hell, for Carter to be a fleshed-out character. It’s a short blast of occult body-horror apocalyptic Western, with hints of a much bigger story in the background. 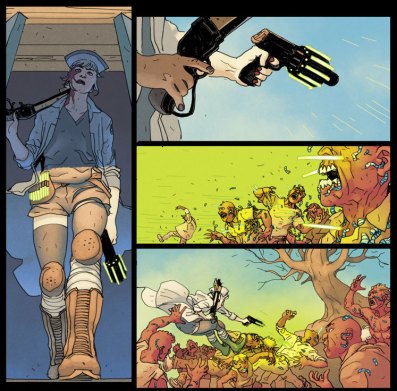 Art duties for this story fall to Alec Morgan (artist) and Nolan Woodward (colours). Both are new commodities to me, but they are a very good fit – both for the story and for each other. Morgan’s pencils and Woodward’s rich palette combine to create a lush yet gritty visual style that pops off the page. The very first page – featuring close-ups of Carter self-stitching a gash in her skull – is especially striking. The glistening blood and the texture of the stitches have an almost-tactile feel to them, which is the optimal result one can hope for with this kind of shot. Again, I haven’t seen their work before this story, but I will definitely be seeking it out from here on in.

If there’s one complaint to be had (and “complaint” is too harsh a term here), it’s that it IS too short. With all the hints of the bigger story leading up to this, it feels like there’s still so much more room to play here. But if that’s the only negative to be found here, that’s still a whole lot of positive.

The Twisted Twins have shown they can handle themselves in the Marvel sandbox as well as they do behind the camera. It’s only a matter of time before Marvel lets them play with one of their A-list titles. And if they’re smart, that will be sooner rather than later. And please find a way to incorporate this version of Night Nurse into the new Marvel Universe, too. She’s pretty kick-ass.