Horror-comedy, often unfairly maligned by the more “hardcore” of the fan community, has slowly been making a resurgence, with such offerings as WOLFCOP and THE EDITOR making their mark on the cinematic landscape. After a limited theatrical run and an award-winning tour on the festival circuit (including Fantasia in Montreal and our homegrown Toronto After Dark Film Festival), add Gerard Johnstone’s HOUSEBOUND (New Zealand) to the list . Now available for viewing in the comfort of your own home (pseudo-pun intended), courtesy of Anchor Bay and Raven Banner Entertainment. Is it worth the blind buy (on the off-chance that you missed it in theatres)? The answer is yes. Wholeheartedly. The synopsis is simple enough: after a botched bank robbery, all-around screw-up Kylie Bucknell ( a star-making performance by Morgana O’Reilly) is placed under house arrest with her family by the court. Back home with her overly-chatty and neurotic mother (Rima Te Wiata ), Kylie’s less than thrilled to be imprisoned at the home she was so eager to leave years earlier, bound by the anklet monitor that tracks her every move. Making matters worse? The strange noises and electrical disturbances that Miriam attributes to an “apparition”… one that seems less than happy with Kylie’s return. Unable to leave, Kylie decides the only way she can save herself is to solve this mystery herself, with the aid of Amos (Glen-Paul Waru), her court-appointed guard/amateur paranormal investigator. And then… things get interesting. Because I believe that too much information can ruin the joy of discovery, I’ll cut the plot description right here to refrain from anything remotely resembling spoilers. There are twists and turns at the three-quarter mark that take the film in a completely different direction, ones which could have landed with a dull thud or sent the whole thing off the rails. But it all works, all gelling together for one of the more entertaining horror-comedies in recent years. And it’s because all the pieces work individually. 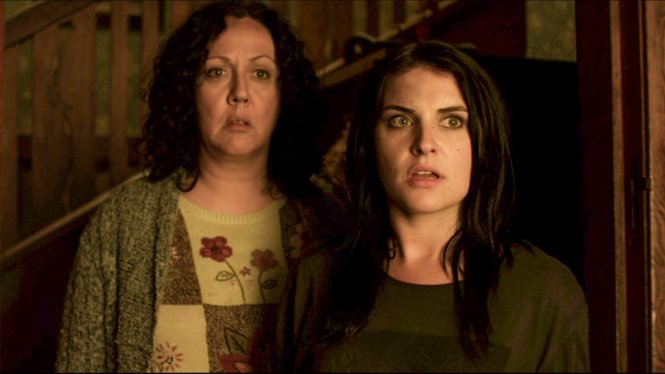 Morgana O’Reilly has been taking the share of the accolades for her performance as Kylie, and with good reason. Equal parts fierce, funny, profane and bad-ass, O’Reilly is the anchor which all the film’s madness is tethered to. But special notice should be given to supporting players, Glen-Paul Waru and Rima Te Wiata.  Waru’s Amos  is bumbling yet selfless and heroic, becoming Kylie’s partner in her little investigation (especially helpful due to his interest in the paranormal) and producing some of the film’s funniest moments. As Miriam, Kylie’s mom, Te Wiata has the unenviable task of creating sympathy for Kylie’s mom. She pulls it off with a funny and sympathetic performance that never feels forced or caricatured. The rest of the supporting cast is also solid, but in the interest of keeping things spoiler-free, you’re just going to have to take my word for now until you see for yourself (trust me, I’m doing this for your own good). As for bonus features, the offerings are minimal: deleted scenes and director’s commentary. Not much more, but not a crucial factor in whether you’ll enjoy the movie or not either way. If you’ve caught any of the buzz around the film, you’ll know that HOUSEBOUND has drawn a lot of comparisons to the work of Peter Jackson. Those comparisons are correct, and probably have more to do with geography than any film aesthetic, but they come with a caveat. It has nothing in common with Jackson’s early work – none of the frenetic, anything goes, good taste be damned sensibilities of MEET THE FEEBLES or DEAD ALIVE (aside from one or two sweet little gore-gags). Instead, it shares a sensibility in line with Jackson’s middle stage, specifically THE FRIGHTENERS.  A fine balance between chills and laughs and a strong emotional current that never gets too maudlin or saccharine The key to enjoying HOUSEBOUND is simple: go in blind, no expectations or preconceptions. It’s clever, funny, creepy and one of the best horror comedies since SHAUN OF THE DEAD.